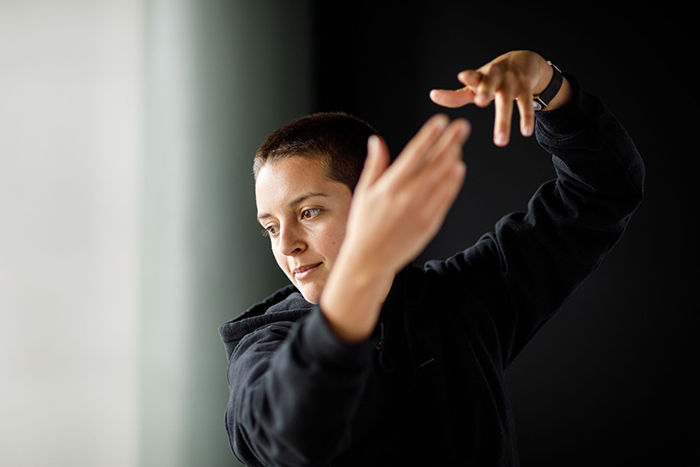 Ivey Wawn is one of nine artistic collaborators who Asad Raza has invited to contribute to his work Absorption at the Clothing Store. Ivey has been a long-term Kaldor Public Art Projects contributor, having performed for Project 29: Tino Sehgal in 2014, and collaborated as part of Project 31: Xavier Le Roy in 2015. We spoke with Ivey about her new work Surfacing, which will be performed on Thursday 9 May 2019.

How would you describe your artistic practice?

I would describe it as a dance-based practice. So coming from dance, growing up dancing and then finding myself working in dancing now at 28. I was just about to tell a lie and say that I’m very much in the body, but actually the whole of this year I’ve been doing research alone in libraries, and I’ve been at the Museum of Applied Arts and Sciences doing theoretical research.

So actually my practice is becoming a bit of a hybrid practice. I’m also doing an undergraduate at the University of Sydney in Political Economy, so that’s really coming into the work that I do choreographically. It’s a dance practice but it’s also a choreographic practice, and it’s a practice of producing logic through theories that look at how political and economic decisions shape social space, and how macro forces condition choices and restrictions on human nature.

How did you begin working with Asad Raza and what is the nature of your collaboration on this project?

Asad and I met in 2011 in London. We worked on a project for Tino Sehgal at the Tate Modern, so that’s how I began working with him and he became a friend. When he began coming to Sydney we were catching up all the time and we would joke that I’m his oldest friend Sydney. So I guess we started collaborating on the project about a year ago, maybe even more. Asad was asking me about my friends—who was here, what’s the scene, what’s the vibe, who he should meet—because his work is really based on building community, and it emerges through a sort of dialogical process.

Asad was really keen to have me do something in the work. He was asking me what I’d been working on and I told him about these performances that I’d been doing with mirrors. He seemed quite into the idea of doing something with the mirrors, so we chatted a bit about that and proposed something to John, and here we are!

Can you describe Surfacing, your work for Asad Raza’s Absorption?

The mirror becomes the central figure within the performance, and it is so because it is a commodity, and being a commodity it conceals the relations of production that go into bringing it into being. This process of abstraction is something that I tend to think about as a process of producing surfaces.

The mirror also does this really lovely thing of reflecting Absorption back on itself, because the performance will happen within Asad’s work. Because of it being a reflective surface, I thought also that the process of producing my performance could be a kind of reflection or repetition of Asad’s process. I’ve invited four friends to collaborate with me on the project, a bit like he invited people to collaborate with him on his project. I’ve invited Ivan Cheng, Daniel Jenatsch, Eugene Choi and Taree Sansbury, who will each work with me in a collaborative way to build a performance. Each bringing our own histories and our own practices and our mediums in order to make a half-hour length sequence of actions that deal with this notion of surface or reflection. Ivan will be writing a text, Daniel makes sound, Eugene will be making sculpture and also she does performance. I work with dance and choreography and so does Taree.

What inspired you to create Surfacing?

I think there’s something so lovely about being offered an opportunity, to have support in making something. It’s a privileged position to be able to present something to the public and to be heard. What felt really important to me was also the process of bringing friends in as collaborators, that that opportunity is shared with everyone, and they’re given agency to present themselves how they want to be presented.

How and when will audiences have the chance to see your work at the Clothing Store?

The performance will happen on Thursday 9 May at 7pm.