Born Tazro Niscino, and working under a variety of names including Tatzu Oozu and Tatsurou Bashi, Japanese artist Tatzu Nishi has created out-of-scale and out-of-place encounters in public spaces around the world since the late nineties. For his Kaldor project, War and peace and in between, Nishi reinvented two sculptures on Art Gallery Road outside the Art Gallery of New South Wales, Sydney—English sculptor Gilbert Bayes’ 1923 monuments The offerings of peace and The offerings of war—providing passers-by a detour from the everyday.

After moving from Japan to Germany in 1987, Nishi was struck by the number of public monuments populating European cities, often so familiar that they go unnoticed. He began to use them as the basis for spatial and social interventions, enclosing the monuments in box-like rooms in incongruous settings so that visitors could experience them anew. In a world where public space increasingly encroaches on private space, Nishi reverses the trend, making playful constructions of scaffolding, often perched mid-air, and reached by climbing temporary stairs and traversing walkways. Inside, giant sculptures crouch awkwardly under low ceilings in wallpapered, carpeted rooms, like Alice in Wonderland. Alongside domestic furnishings, these oversized figures appear unexpected and astonishing.

In Sydney, Nishi enclosed The offerings of peace within a living room and The offerings of war in a bedroom. The constructions, wrapped in plastic sheeting and temporary building materials, resembled the scaffolding that encases sculptures during restoration. In the first installation—in what appeared to be a modern apartment, with thick carpet and bland furnishings, including pot plants, fruit bowl and magazine—the olive branch–bearing bust of The offerings of peace seemed to stand like an ornamental “conversation piece” on a coffee-table, the nearby wardrobe revealing the horse’s head, as if some kind of cruel, secret sacrifice. In the second installation, The offerings of war, triumphantly surmounting a pair of double beds pushed together, as if in a hotel, appeared massive and intimidating in such an ordinary context.

As symbols and monuments, each of the objects Nishi transforms reflects the social fabric of its setting. By altering their scale and context, he changes the way these objects are viewed and their function within public space. For Nishi, “When [a] sculpture is surrounded by my project, people notice it again and they also remember its story. The sculpture looks fresh and renewed… you see it from a new perspective”.

born 1960 in Nagoya, Japan
|lives and works in Berlin, Germany, and Tokyo, Japan 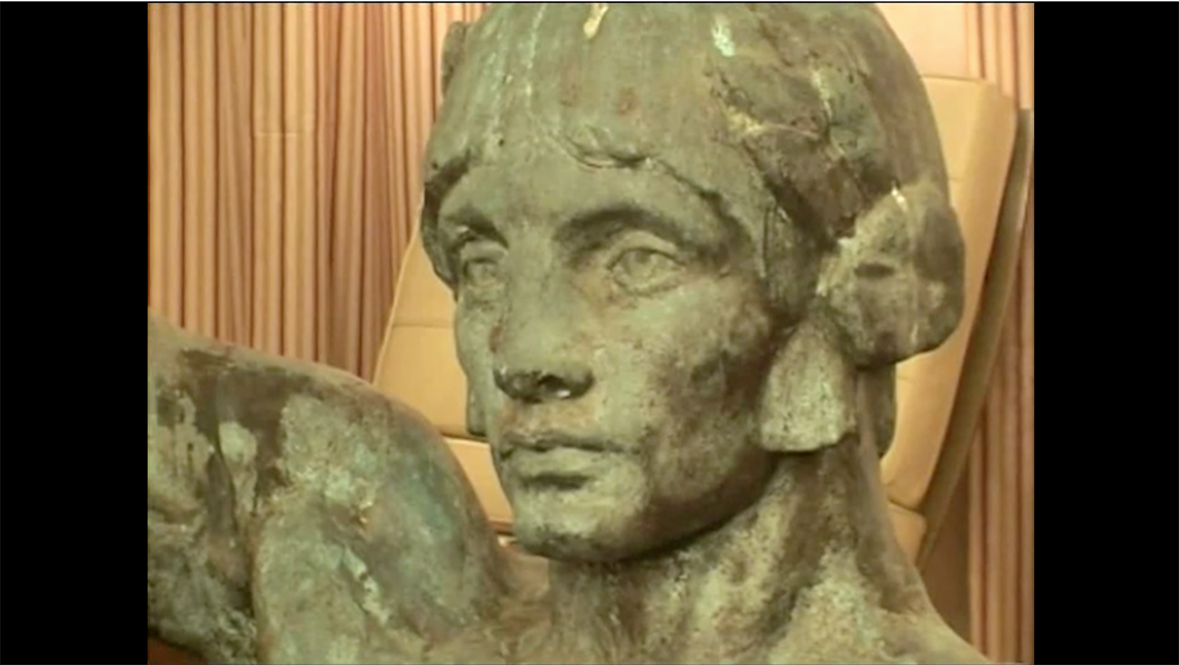 Documentation of Tatzu Nishi's War and peace and in between, 2009 (silent)

Since the late 1990s, Tatzu Nishi has been decontextualising monuments and architectural landmarks across the globe. Nishi’s artistic practice involves spatial and social interventions in which familiar, often unnoticed, public artworks are enclosed and displaced in foreign, temporary domestic settings, allowing visitors to experience them anew. For the first time, we find ourselves in intimate private settings with an overlooked public artwork; the surreal encounter altering our perceptions of public and private. Born Tazro Niscino, the Japanese artist works under a variety of names, including Tatzu Nishi, Tatzu Oozu and Tatsurou Bashi. 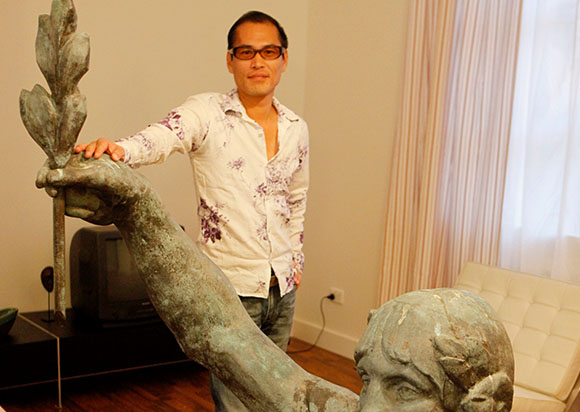 This Education Kit looks at the work of Japanese artist Tatzu Nishi, known for his installations in public spaces, and examines the broader themes of installation art and the perception of space outside the ”white cube” of the gallery.

The archive for Project 19 reveals the process behind Tatzu Nishi’s site-specific work War and peace and in between, which transformed two bronze monuments–The offerings of peace and The offerings of war—outside the Art Gallery of New South Wales, Sydney. Through emails, itineraries and production quotes, along with photographs and drawings, the archive offers insights into the planning and realisation of the work on Art Gallery Road. Featured items include Tatzu Nishi’s hand-drawn sketches and specifications, detailing the layout, materials and construction of the work.

VISIT PROJECT 19 IN THE ARCHIVE