Barry McGee’s signature droop-faced figures, vibrant optical patterns, tags, drips and doodles have populated vast and complex installations around the world. Drawn from hybrid sources—across cultures, urban architecture and the detritus of the streets—McGee’s amassed imagery, his piles and stacks of derelict materials and objects, transform spaces to create an entropic vision of the contemporary city.

First tagging at the age of eighteen as “Twist”, McGee became known for his unique imagery and visual style. For him, “Graffiti means making marks on surfaces using just about anything, be it markers, spray, paint, chalk, lipstick, varnish, ink. The aim is to maintain the energy created by disturbance or excitement in the street”.

For his Kaldor project, McGee created the billboard-like Water wall mural over the National Gallery of Victoria’s glass water wall, and transformed North Melbourne’s heritage Metropolitan Meat Market with The stars were aligned…, a cacophony of chequerboard shapes, urban characters and cast-offs, booming and colliding with sound and energy. Assembled from found and painted objects, The stars were aligned… created an atmosphere of bombardment, overflow and excess, evoking the sensory overload of contemporary consumer culture and paying homage to the outcasts of a disposable world. A patchwork of panels lined the false walls, pieced together like a jigsaw puzzle of mismatched fragments, with cartoon buildings, bricks, tiles and stairs amassed into an abstract pattern of forms. Curator and critic Alexie Glass described these composites as “mosaics of multi-hued geometry spread like fractal moss, over, up and along the walls”.

Truck pyramid, the installation’s centrepiece, piled eleven derelict trucks, overturned or tipped at odd angles, atop a shipping container, doors flung open, lights flashing, wheels still turning, as if in the aftermath of some apocalyptic collision or cartoon pile-up. At the apex, mechanical legs jerked over the top of an old sofa. Underneath, in a surreal collage of urban space, the shipping container was converted into a public bathroom with cubicles, basins and soap dispensers.

Hand-drawn test patterns and scenes of illegal street activity flickered on a circular wall of old television monitors stacked on the floor. Empty liquor bottles adorned with coloured portraits hung in an overlapping, fragile cluster; their disembodied faces, coloured red, blue, white, brown or green, all bore a similar ragged look. McGee sees them as “this everyman, and it’s very specific to San Francisco, where there’s a huge homeless population that everyone wants to be free of, a bit like graffiti”. These “everymen”, and the derelict objects that surrounded them at the Meat Market, seemed both tragic and heroic, colourful debris of the streets that the city is “trying to hide, or pretending doesn’t exist”. McGee explains, “With my work, I’m trying to reveal this”. 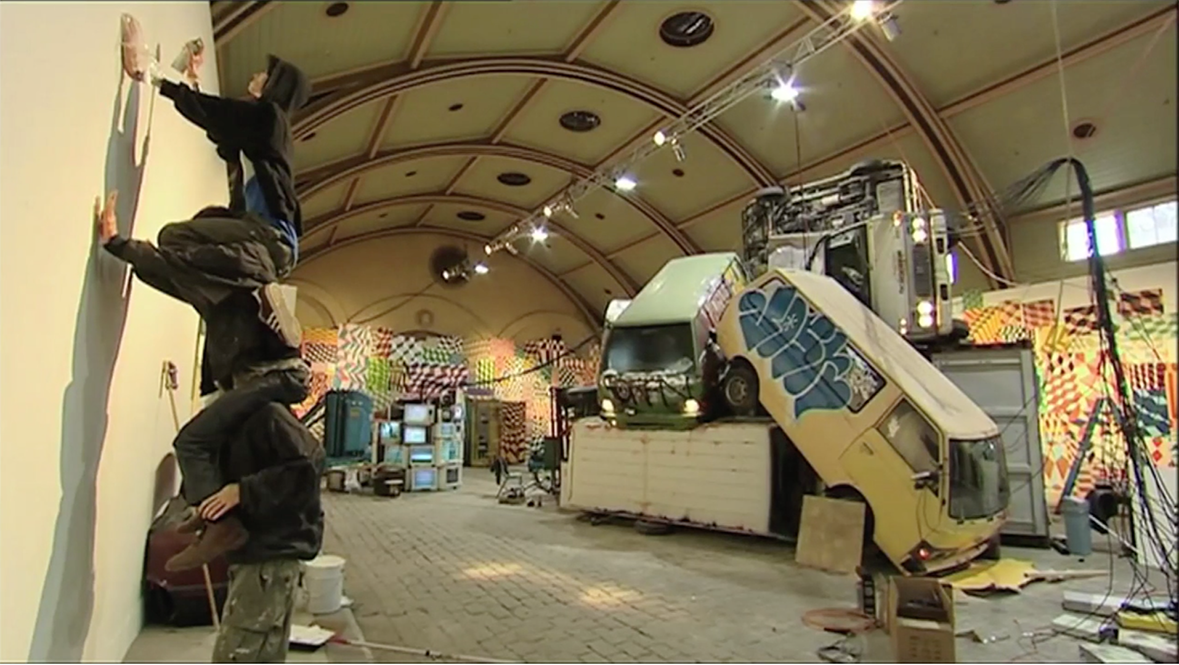 Barry McGee's The stars were aligned... at the Meat Market, Melbourne, 2004, courtesy of ABC TV

Beginning his career in 1984 as a graffiti artist under the tag name “Twist“, Barry McGee became known for his signature droop-faced figures, vibrant optical patterns, tags, drips and doodles. In the 1990s he expanded his signature style into a museum context, creating extraordinary installations from amassed imagery, piles of derelict materials and objects, creating an entropic vision of the contemporary city. 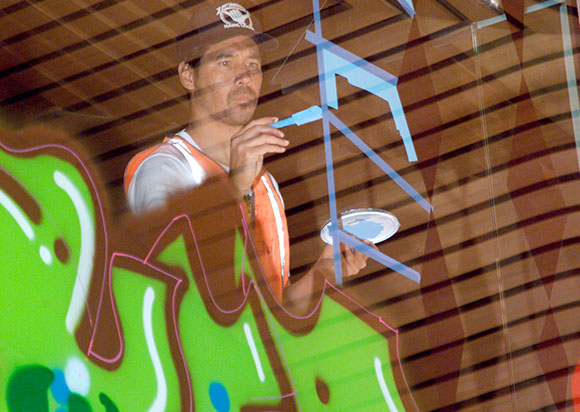 This Education Kit explores the practice of Barry McGee, his background as a graffiti artist, and the display of graffiti art in “white cube“ museum spaces.

The Project 14 archive tells the story of Barry McGee’s project at the Metropolitan Meat Market and NGV in Melbourne in 2004. Press clippings, photographs and planning documents are complemented by McGee’s characteristically playful sketches and montages, along with illustrated letters and notes. Featured items include a series of original drawings on coloured card by McGee.

VISIT PROJECT 14 IN THE ARCHIVE