For his first major Australian exhibition, Spanish artist Santiago Sierra presented 7 forms measuring 600 × 60 × 60cm constructed to be held horizontal to a wall, unifying sculpture and performance to create a physical portrait of the labour economy.

Sierra is one of the world’s most provocative and politically controversial artists. His sculptures, performances and actions extend the vocabulary of minimalism to address contemporary social and political issues. The artist is famously secretive, refusing to be photographed or to discuss his life.

Sierra studied in Madrid, Hamburg and Mexico City, where he lived for fourteen years from 1995. “Mexico was the most important influence in my life”, Sierra explained. “In Mexico you become part of the higher levels of society because you are European. These kind of issues were very important to understand how tough the working conditions are in some parts of the world.”

While Sierra’s early work involved obstruction and disruption in urban environments, since the late nineties, it has involved people, addressing the inequalities and indignities of labour, the divisions between the developed and developing worlds, and issues of individual freedom and mobility.

Drawing on the art-historical tradition of using paid models, Sierra began commissioning models from society’s exploited margins—streetworkers, illegal immigrants, drug addicts, refugees, the homeless, unemployed and dispossessed. In 160cm line tattooed on 4 people, 2000, Sierra tattooed four heroin-addicted prostitutes, paying them in drugs and exhibiting them at a gallery in Salamanca. For the 49th Venice Biennale in 2001, he paid 133 illegal street vendors from China, Senegal and Bangladesh to dye their hair blond.

For Sierra’s Kaldor project at the Gallery of Modern Art, Brisbane, twenty-eight temporary workers, recruited through a local employment agency, were paid minimum wage to hold seven black structures on their shoulders, recalling the caryatids of classical architecture. Two teams of fourteen workers held the structures in place over eight-hour shifts. Some stared straight ahead, others looked at their phones to pass the time. Originally conceived in 2001 and previously presented in Zurich and New York, the work addresses what Sierra has called the “social burial” of labour, dividing the gallery into “those who work and those who watch”.

For eyeline critic Emma Cain, the work highlights “both our interdependence and the relationships that surround us”. She adds, “questions such as ‘what supports us?’ and ‘what loads do we bear?’ continue to resonate weeks after encountering the work”. Santiago Sierra’s sculptures, performances and actions draw on the vocabulary of minimalism and land art to address social and political issues within the contemporary world. Exploring the boundaries of labour and exploitation, Sierra often uses human participants in his events and sculptural configurations. Paid for their subjugation, Sierra reveals the shades of inequity and desperation within different social environments and communities. 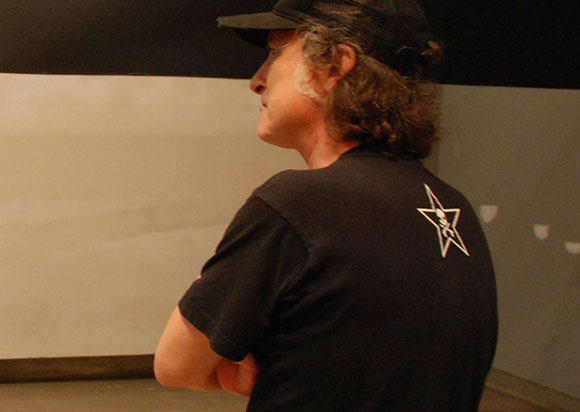 The Project 22 archive traces the development of Santiago Sierra’s 2010 installation, 7 forms measuring 600 x 60 x 60cm constructed to be held horizontal to a wall. Through emails, press clippings and itineraries, along with technical plans, sketches and photographs, the archive covers the process of planning, installing and recruiting participants for the work at the Gallery of Modern Art, Brisbane. Featured items include a series of emails, maps and plans, documenting Sierra’s proposal for an unrealised project at Barangaroo in Sydney.

VISIT PROJECT 22 IN THE ARCHIVE