Harald Szeemann was the late twentieth century’s most celebrated and influential curator. He pioneered the display of conceptual art and performance, created some of the first cross-disciplinary, non-chronological exhibitions, and experimented with non-museum spaces. Blurring the boundary between artist and curator, Szeemann forged many of the basic premises of contemporary art exhibition today.

As director of the Kunsthalle Bern in Switzerland over 1961–69, curator of the groundbreaking documenta 5 in Kassel in 1972, and curator of the Venice Biennale in 1999 and 2001, Szeemann presented innovative shows throughout his career. His 1969 exhibition When Attitudes Become Form: Live in Your Head is known for pioneering conceptual art.

In 1971, John Kaldor invited Szeemann to curate an exhibition in Sydney and Melbourne promoting cultural exchange and engaging with “dominant international trends”. Over two weeks, Szeemann visited studios, galleries, museums and private collections in Sydney, Adelaide and Melbourne to view the work of seventy artists.

The result of Szeemann’s visit was I want to leave a nice well-done child here, a dynamic exhibition of works by twenty-two young artists at Sydney’s Bonython Gallery and, later, with additional work by Mike Brown, at the National Gallery of Victoria in Melbourne. It was the largest exhibition of conceptual art ever staged in an Australian museum.

The Sun’s James Gleeson asserted, “The Szeemann selection isn’t the exhibition for the eye – it is intended for the mind. One must approach it without prejudices and with one’s sensory equipment stretched to the utmost in an effort to reach the purpose deep within the unfamiliar forms”.

JOHN ARMSTRONG
born 1948 in Sydney, Australia
lives and works in Brisbane and Mornington Is., Australia

WARREN KNIGHT
born 1941 in Minneapolis, US

Harald Szeemann proposed the notion of the independent curator, radically altering the future of curatorial practice. Szeemann developed the idea of the “great exhibition“ in which works were brought together by a central cross-disciplinary theme. This is perhaps best exemplified by his work as the curator of documenta 5, 1972, where he established the current notion of the international biennale. Szeemann saw his ground-breaking new style of curating as creating “poems in space“. 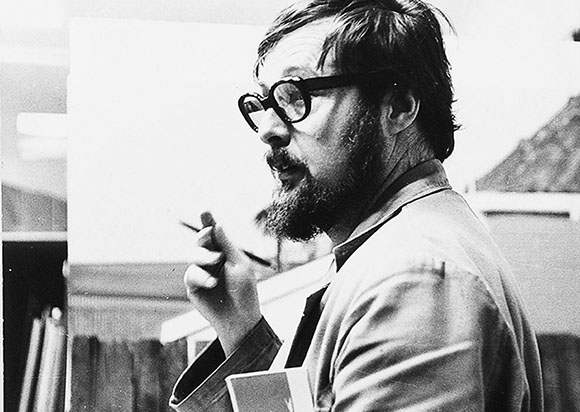 This Education Kit explores the groundbreaking curatorial practice of Harald Szeemann, known for pioneering the role of the “independent curator“, and his time spent in Australia in 1971.

The Project 2 archive offers insights into Harald Szeemann’s 1971 visit to Australia, and the realisation of the exhibition I want to leave a nice well-done child here, through letters, invitations, schedules and press releases. Highlights include a series of photographic prints by ABC TV producer Brian Adams, documenting the visit and Szeemann’s meetings with Australian artists.

VISIT PROJECT 02 IN THE ARCHIVE