“When are they going to make a mistake? When is one of them going to fall over?“ But they never did that. The work was not about failure, the work was about success. 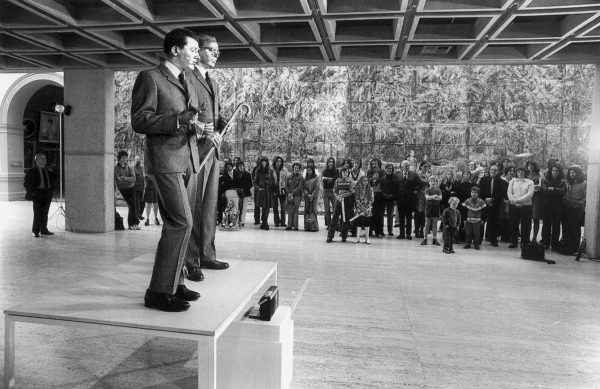 Gilbert & George present The Singing Sculpture at the Art Gallery of New South Wales with their 'charcoal-on-paper sculpture' displayed at rear. Photo: Macrae/Fairfaxphotos

In 1973 Gilbert & George presented The Singing Sculpture in the entrance court of the Art Gallery of NSW as Kaldor Public Art Project 3. For five hours a day over six days, the artists stood side by side on a table singing along to a cassette tape playing the Depression era song “Underneath the Arches“. Their monumental “charcoal-on-paper sculptures“ The Shrubberies were hung across the gallery walls.

Aleks Danko was a young art school graduate who had recently moved from Adelaide to Sydney. Using text and humour to challenge conventional understandings of art, his work had been selected by curator Harald Szeemann for inclusion in Project 2 in 1971, a group exhibition of 22 Australian artists that took place in both Sydney and Melbourne.

Aleks was mesmerised by Gilbert & George. His brief visit to see The Singing Sculpture soon stretched into four hours:

They had a level of composure to keep repeating that over and over again, and it was like throwing the challenge back at the viewer to see if the viewer could actually hold them: it was a two-way street. I think that was an interesting thing about being there for four hours.

A lot of other people got sucked into it by their mesmeric quality. “When are they going to make a mistake? When is one of them going to fall over?“ But they never did that. The work was not about failure, the work was about success.

As “living sculptures“, Gilbert & George wore traditional tweed suits every day, and during the performance their hands and faces were painted a metallic bronze colour. The work fascinated audiences in Australia, including Aleks:

It was something that really appealed to me in terms of English wit and humour as well. Underlying their work is a critique of the social mores of English society: in a sense they are very ironic in their gestures. But also, it’s a kind of critique of the English inability to deal with gay culture and all that represented. So they have a sexual politic in their work as well as the social critique.

While the media tended to sensationalise Gilbert & George as an oddity, many Australian artists, like Aleks, celebrated the freshness of their approach:

These were living sculptures, so they kind of broke open a whole range of ways in which people were asked to look at art, or look at contemporary art practices. This straddled aspects of theatre, performance, into the visual art context, and it’s about the artist becoming the work as well, so there was a whole range of things that were turned on their heads by their presence and their action.